Leadership: the why versus the what

June 2008 | By Javier Roza, Professor of HR Management at IE Business School
Management comprises much more than simply exercising the authority that goes with the position. It is about gaining the respect of a business organization, and motivating employees by winning their trust.

Business management can be considered from different standpoints. Take the most superficial and egomaniacal form, for example, that of the autocratic, insecure director (not leader) who needs and uses the power given to him by his post. He or she sees the firm as his property and employees tend to be seen as inferior beings of lesser intelligence the lower their place on the organisation chart, or people who (by default) have bad intentions which range from inaction to sabotage. The assumptions on which this view is based come from the hobbian idea of man, typical in preindustrial society and still visible in many companies.

Of course, in order to survive a company must be capable of managing the resources that allow it to give its employees and shareholders fair pay, as well as having access to investment to keep its activity competitive, all this through the satisfaction of its customers, users and consumers.

But to achieve this in the 21st century, a time of the greatest intellectual capacity in the history of the human race, we can no longer apply models based on ignorance. Today, if we treat employees as inferior beings, we will only obtain disinterest and cynicism as a response. However, if we treat all employees as intelligent beings who know what they are doing in their job and we give them the information they need to be able to take the right decisions at their level, we shall obtain at the very least greater organisational efficiency since decision and subsequent action will be taken at all levels including the lowest possible, increasing speed and adaptation to the market. We will also see greater enthusiasm and commitment, both based on respect. People are loyal to people, not to abstract entities.

Myanmar: have we again forgotten the tragedy?

Cyclone Nargis has once again placed the spotlight on the brutal repression taking place in Burma. Will the world forget as quickly this time as it did after the â??Saffron revolutionâ??

Myanmar disappeared from the news headlines and our collective consciousness months ago after the brutal repression of the “saffron revolution”, a peaceful protest led by Buddhist monks to demand the end of a repressive government. On that occasion, we forgot to ask how many hundreds of unarmed demonstrators had died and when a new democratic government would arrive. Sadly, the catastrophe of the Narcis cyclone has once again put the Asian country, one of the poorest and most repressed in the region, on the front pages of all international media.

On its way through Myanmar (Burma for the countryÂ´s democrats), the cyclone has destroyed everything in its path. The houses built with cardboard walls and earth floors did not need much and the cyclone has flattened entire villages without leaving one single building standing. The almost inexistent transport network has isolated hundreds of thousands of victims. An independent international sources set the number of deaths at 100,000, with at least another one million victims left homeless. Witnesses say that endless numbers of corpses float down the rivers and that it is impossible to walk through the rice fields without stumbling over them. Food is expensive and scarce and does not reach survivors. Furthermore, there is no electricity or drinking water in the most heavily affected areas. With the passing of time, the threat of contagious diseases such as cholera and dengue fever is imminent while the dead bodies of people and animals rot in the streets.

IE Business School, Sun Microsystems, and Pueblo InglÃ©s have received awards for contributing to the development of innovative contents and tools to improve training programs. Indra, the leading IT multinational in Spain and Europe held the 1st Edition of the Univerhsus Awards for Innovation, designed to recognize the work carried out by institutions and partners… 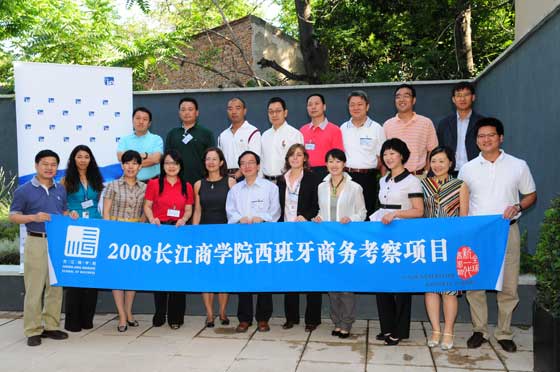