Do what you love! – An interview with IE Alumna Vasundhara Mudgil

Vasundhara is an extroverted introvert, which is probably why she feels she truly enjoys being a communications professional. In her childhood, she lived in several countries, and that itch to travel, meeting new people, and immersing in the local culture continues to be an integral part of her life even today. She thrives on learning…

If not you, then who? – An interview with IE Alumnae Luciana Vilar Denardi

I met Luciana during our MBA studies at IE. Our paths crossed during one of the most amazing years of our lives. I wished we could have done this interview in person, and yet I still feel extremely grateful to share the written article with a great person and her story. It may inspire you…

Are you working in a collaborative environment?

At IE University we grow and excel together! This week we had the great pleasure to welcome on campus top executives from TATA, Wipro, Acciona, Enzen, Indra, Suzlon to mention only a few, to discuss their expansion plans within the India-Spain Economic partnership. The initiative was a great platform for current IE students to explore job…

Who’s Got the Top Jobs?

“The most important thing is to have very clear ideas and then get things done instead of worrying about them.” This is the philosophy Cristina Bondolowski has successfully applied at each of the challenges she has faced to become world executive director of the most famous soft drink on the planet: Coca-Cola. Always with the same work formula: “Kicking into action when I face a challenge”

After working under a fellowship at IBM during the last two years of her degree, graduating in Business Administration at CEU San Pablo and completing an MBA at IE Business School, her interest in marketing took her to companies that included Estrella Seguros, Pepsico, Universal & Paramount Video Pictures, and Colgate-Palmolive, “where there was a school exclusively for marketing”, on her way to Coca-Cola at the end of the 1990s. She started working as manager of one of the company’s products (Sprite) and later became the brand’s director in Spain. She was then promoted to director of the fizzy drinks business unit in the same subsidiary.

Since May 2008, she has controlled Coca-Cola’s global development strategy in the 207 markets in which it operates. Has so much responsibility ever made you feel giddy?

If I’m honest, it has never made me feel giddy. First of all because we are all directors of the Coca-Cola brand because we all have an opinion about it. I always say that Coca-Cola is like the economy: everyone wants to give their opinion and they do so because they are interested and that is a very good starting point. And, of course, you feel very protected when you have so many brand directors outside and inside the company. The main challenge has been how to lead those points of view in the direction I want them to go. And it has never made me feel giddy because when the company offers you a position like that, it’s because they think you are capable. Perhaps one of the things Spanish directors often lack is the ability to believe in themselves. When you go elsewhere and start working with people from other cultures, you realise they believe in themselves much more than we do. In the end, the company takes its decisions on the back of a great deal of experience. They have seen your work, you have achieved results in your starting country (in my case, Spain) and they select you because they want the way you understand the business, the brand, marketing and team leadership to be applied and transmitted on a global scale.

From Asia to Africa?

Some African countries are among the fastest growing countries in the world. It is no wonder that many Asian businesses are looking into investment opportunities and some IE graduates from Asia are doing the same. The IE Africa Club organized recently the first IE Africa Day to inform interested students at IE about investment and…

Tyba, a project from IE University BBA program, wins the Public Vote Award of this year The Next Web Europe Conference. Tyba, created by Eiso Kant (22), Jorge Schnura (22) and Philip Von Have (24), all final-year students of IE University’s Bachelor in Business Administration, is an online recruitment tool that permits students and recent graduates…

Are you planning to work in Singapore?

See what is happening on the IE campus today: Contact Singapore is promoting to work in Singapore! 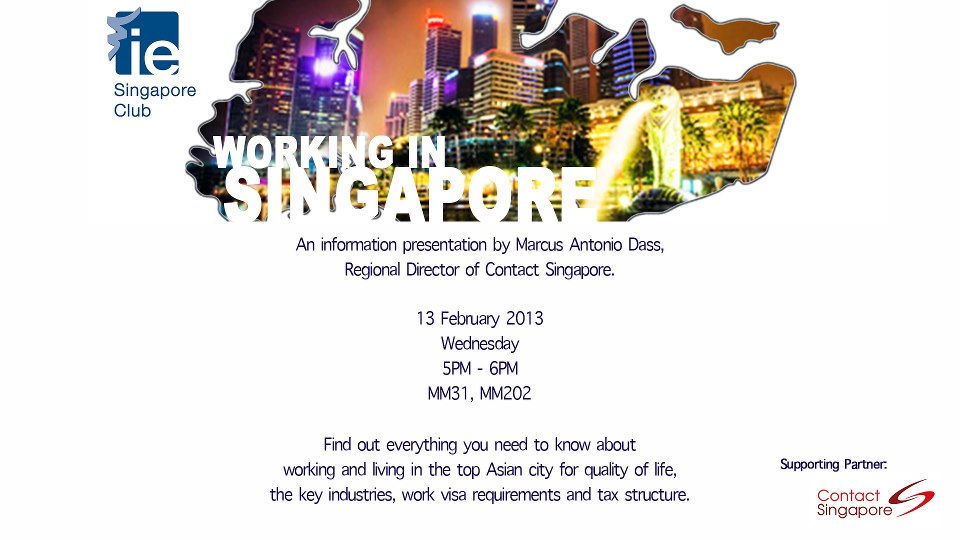 The alternative to a 2-year MBA

Are you considering accelerating your career in capital markets or investment banking, or switching from other professional fields to finance? Do you see yourself as the future CFO – Chief Financial Officer – of a company? Are you interested in working as an entrepreneur with a firm supported by private equity, perhaps leveraging opportunities provided…

Various IE Business School alumni spoke to current students about career changes, how to deal with failure, and about keeping your mind open.

What are the industries of the future?

Where should your professional development take you? Is it the right study / professional path you’re currently on or should you re-focus? Carlos Diez, Associate Director from the IE Career Management Centre, explains what the trends are in his field of expertise. Enjoy and let us know if you’re on the right path – or…

In a fast moving world we need to always be updated about the latest technologies and trends. Lately, more and more our digital identities are taking over our physical identities, that´s why at IE we chose ¨Brand Yourself¨ as the subject for our series of Tips&Tricks around South East Asia where we talked about how…

How to build and orchestrate your Digital Identity?

With a continuously growing impact of social media in our personal and professional life’s, there is no way back NOT to think about building and orchestrating your digital identity. In the upcoming seminar series in South East Asia (dates below), we will highlight certain social media and the way you should use them in your…