China shows the world how to get through a crisis

VERY INTERESTING ARTICLE BY FINANCIAL TIMES. Call me mad but this crisis is good for China. It is also good for China’s role and responsibilities in the world. Yesterday, we upgraded our gross domestic product forecasts for China for 2009 and 2010; we are now looking for 8.3 and 10.9 per cent, respectively, up from…

In the frame of the Asia-Europe Young Leadears Symposia, Madrid will host this week the 1st Asia-Europe Young Urban Leaders Dialogue with the active support from IE Business School amongst others. This symposium aims at promoting better understanding between Asian and European societies by intensifying intellectual, cultural and social exchanges between the local, urban and…

Did you know that Spain is: The 8th largest economy in the world? The 3rd largest investor worldwide and the 2nd largest in Latinamerica? The 7th largest recipient of FDI stock in the world and 4th in the EU? The Economic & Commercial Office of the Embassy of Spain in Singapore together with â??Invest in…

IE Business School has opened the access to its multimedia documentation for individual and personal use, under a creative commons license. Finally this long internally discussed project is going alive and shows to the public in which fields IE innovates and creates value to society. IE develops multimedia documentation for both online and face to…

The Reign of Spain: European champions (of nearly everything)

This article was published last month in the Independent, and certainly is catches your attention as it describes many undiscovered attributes of Spanish life: Food, Fashion, Architecture, Society, Cultural Heritage, Travel Destination!

Sunday night’s triumph in Vienna was a moment of pride, unity and joy for this nation â?? and a mark of how far it’s come. Elizabeth Nash reports from Madrid

Spain is enjoying a moment of glory. Last night’s triumphal homecoming of Euro 2008’s conquering heroes revealed everything that is good about Spaniards today, their spontaneity, their gregarious sociability, their unbridled â?? sometimes excessive â?? lust for partying.

The celebrations have shown something else: that Spain is enjoying a new confidence, a relaxed sense of national pride, a self-esteem it has rarely if ever experienced before, divested of old complexes. One of the commonest comments made by those celebrating Sunday’s victory was “I’m proud to be Spanish” and “I’ve never felt more Spanish”. And they said it without the defiance you used to hear, but naturally, with joy in their faces. They were not trying to convince you of their superiority. They were having fun.

And the reason for their new-found ease was that the old braggadocio that compensated for feeling small, dark, isolated from Europe, hopeless at languages, a failure at the game they loved, was replaced by the serene confidence they absorbed from their youthful footballers. No fake heroics, no swaggering, no assumed “Latin” passion, just the pride of a nation of small, dark blokes of humble origins who ran rings around the blond, cultured man-mountains of Europe’s mightiest footballing nation.

Ferran Adrià: The Alchemist of the Senses 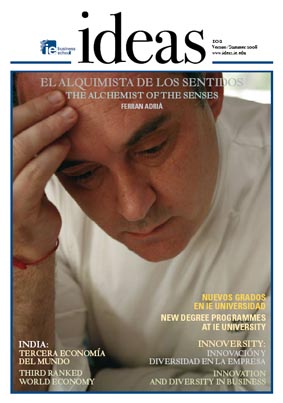 In conjunction with the FAS (Femmes Africa Solidarite) and the Spanish Government, the Center for Global Diversity in Management and the Department of Entrepreneurial Management at IE Business School has accepted twenty-two women from Liberia, South Africa, DRC, Mozambique, Senegal and Rwanda into the recently launched advanced training and mentoring program for women-lead businesses in…

Singapore Technologies Aerospace Ltd (ST Aerospace), and IBERIA Maintenance, the technical division of IBERIA Airlines of Spain, have signed a joint venture agreement to set up a landing gear repair and overhaul company in Madrid, Spain. The joint venture company, Madrid Aerospace Services S.L., will be equally owned (50:50) between IBERIA and ST Aerospace, and…

This article was published on Feb 11, 2008 in The Edge Daily, Malaysia More Spanish companies are coming into Malaysia due to the low cost of doing business here and as rising Spanish exports to Malaysia increase the demand for the countryâ??s goods and services. Spainâ??s economic and commercial counsellor to Malaysia and Brunei, Antonio…

The Embassy of Spain in collaboration with The Arts House present the 3rd Spanish Film Festival in Singapore. Spain has successfully produced a good number of movies categorized under the term film noir. A selection of famous movies where the crime fiction and intrigue are accompanied by the extraordinary sensuality of their protagonists it is…

Inside España – the newsletter about Spain for Singaporeans

The Spanish Tourism Board in Singapore started recently an own newsletter with the latest, hippest & hottest happenings that Spain has to offer to Singapore. Whether you’re interested in arts, music, fashion, food or the famous Spanish passion for life, be assured that there will always be something for everyone. You can join the mailing…

The annual learning and networking event for Entrepreneurs run by IE Business School will be held on November 29. The IE Venture Day promotes the creation of new business and further strengthens the corporate ecosystem needed to nurture entrepreneurial management, a key part of our economy. The IE Venture Day 2007 is designed to serve…

Blog smog: A look at life on the web

From Carly Chynoweth, published in The Times, November 15, 2007. Click here for the original. If you ever wondered what people really think of their jobs, blogs can be a good way to find out. We profile ten of the best. A couple of years ago there were stories about unfortunate workers losing their jobs…