This is IE University!

Here’s a short video on the new faces at the IE University campus in Segovia, Spain. Enjoy and engage with IE University online on www.ie.edu/university.

Can  studies of the mind tells us about dynamic and successful venturing? In the upcoming IE MasterClasses in Tokyo and Seoul we will provide an insight on research for improving their entrepreneurial abilities and help them understand their own mental patterns important for entrepreneurship:      Tokyo, October 8, 2011 12noon (local time) – Register      Seoul, October…

2012: the BRICs will take the growth lead

IE Business School survey reveals that expectations for economic growth in 2012 are focused on the BRICs. The highest growth rates in 2012 will be found in the BRIC countries. So say 94% of the directors who participated in the 2012 IE Global Alumni Forum (GAF)  survey of the world economic outlook for 2012.

Some 827 directors from 61 countries in all five continents took part in the survey, drawn up by IE Business School in the lead up to its Global Alumni Forum – GAF Madrid 2011, set to take place on September 30. Speakers include Ángel Gurría, General secretary of the OECD, who will be examining the world economic Outlook, together with Guillermo de la Dehesa, President of IE’s International Advisory Board de IE.

According to participants in the survey the BRICs are the countries with the greatest potential for growth in 2012, with Brazil being the country most expected to have the highest rates (40%), followed by China (39%), India (17%)  and Russia (5%). Meanwhile, 91% of participants think that the Latin American region will either maintain its current rate or grow faster. The survey results point to a generally held belief that the Latin American countries with the best future potential were Brazil (58%), Chile (17%) and Peru (10%). With regard to Europe, 77% feel that the European economy will stabilize or grow in 2012. Sixty two percent think the same about the EU. Within the EU, 64% consider that Germany will have the best growth rate, followed by Poland (7%) and the UK (5%). 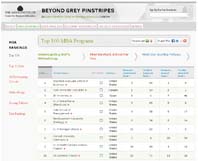 The biennial survey is the most important in its field, gauging the level of integration of social, ethical and environmental issues in the MBA and executive education programs of 149 business schools. In this latest edition, IE Business School has climbed from 9th to 3rd place, thereby further consolidating its position as a leading reference worldwide in the integration of corporate social responsibility into management education programs.

The Beyond Grey Pinstripes report examines the extent of each school´s inclusion of issues related to social responsibility, ethics, and the environment in MBA programs, aimed at shaping managers and directors with a sound awareness of how their business decisions impact the environment. The ranking is based on a total of over 80,000 pages of information provided by 149 business schools from 22 countries. Parameters include social, ethical and environmental content in MBA programs, and the level of student exposure to related issues. In this year’s edition, the MBAs of business schools include an average of 33 courses that feature content related to sustainability, while the IE Business School MBA includes over 90. The report also evaluates the opportunities schools provide for their students to devote time to ethical and environmental concerns, along with the number of teaching hours dedicated to such issues, the percentage of students who choose to get involved, and the relevance of MBA course content and research carried out by faculty.

Learn in the lastest edition of IE Edutainment about first year IE University BBA student Carolin who spent 2 months at UNICEF – part of IE University’s Social Impact Project – and we go behind the scenes at the First International BIARI Workshop, as participants wrestle with the issue of Climate Policy for World Cities.

On September 17, 2011 IE University will inaugurate its 4th academic year. This academic year 2011-12 its also marked by the launch by the LLB in English as well as in Spanish and the BBA-LLB Dual Degree in both languages. This coming Friday students from 50 different nationalities will start to study at IE building…

We would like to take this opportunity to invite you to a Master Class titled “Creating Competitive Advantage Beyond the Market”, taking place in Manila: Date: Saturday, August 27, 2011 Time: 11:30 – 13:30 Venue: Makati Shangri-La, Ayala Avenue cnr.  Makati Avenue, Makati City 1200 Registration: IE Event Page In a more complicated and increasingly…

We would like to take this opportunity to invite you to a Master Class titled “Achieving Success through Networking and Social Capital”, taking place in Singapore: Date: Wednesday, August 24, 2011 Time: 19:30 – 21:00 Venue: Gallery Hotel, 1 Nanson Road, Singapore 238  909 (near Robertson Quay) Registration: IE Event Page The session will be…

The current crisis has once again shown how wrong economic forecasts often are. So why is it such a deeply flawed profession? John Galbraith once said that “The only function of economic forecasting is to make astrology look respectable.” Although many of us are avid readers of economic forecasts issued by the OECD, the IMF, and the EU (the government’s forecasts tend to suffer from a general lack of creditability), it is questionable if our confidence in them is well founded. In my opinion, which is based on my experience, it is not.

Firstly, a large number of economic models try to predict the future by extrapolating the past. The current crisis, like so many others, has highlighted the folly of this method. Such models also predicted in the 1950s that the USSR would become the world’s most powerful economy (its economic growth rate was three times that of the west at the time), and the same was said about Japan (remember the best seller Japan as Number 1, by Harvard Professor Ezra Vogel?), the Asian dragons in the 90s, and now it’s China’s turn. The logic of projecting past growth rates onto the future is an intellectual and economic fallacy, as stated by Paul Krugman in his excellent paper “The Myths of Asia’s Miracle”.

IE Master in Finance ranked No. 2 worldwide by FT

IE Business School holds the No. 2 position in the Financial Time ranking of Masters in Finance programs.

The IE Master in Finance achieved this result in the pre-experience category with its full-time English-taught program, aimed at young professionals with an international profile. The student body of IE’s Master in Finance program comprises 95% international students from 23 countries, and takes place in Madrid and New York.  It is the first finance program in Spain to be awarded the status of Program Partner by the CFA (Chartered Financial Advisor) Institute, the leading international standard for financial analysts.

Ignacio de la Torre, Director of Masters in Finance at IE Business School says that the finance sector needs specialized profiles with an international focus. “This is exactly what our programs provide, and our graduates work in firms like UBS, Morgan Stanley, Credit Suisse, Waterland and BCG. Emerging economies also offer enormous potential given the rapid development of their capital markets.”