IE Business School launches its first edition of the Asian version of the Economic Journalism contest. The contest attracted 1000 journalist in its 3rd edition in Latin America and recognizes the article and media that best fosters economic culture among the population of the country in question by explaining how global trends and movements are impacting the spending power of its citizens. 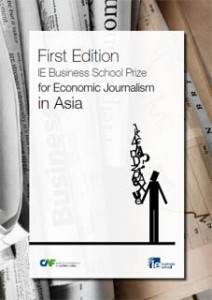 The Prize is dotated with US$3,500 for the winner.

The last 20 years have seen unprecedented levels of development and economic transformation in practically all the countries in the Asian continent. This growth is evidenced not only by macroeconomic figures but also by the change in the day-to-day lives of hundreds of millions of Asians, duly documented and chronicled by the media in countries throughout Asia. These narratives of the different phases of economic growth include accounts of the first arrivals of foreign business, mass exportation to the West, and the major inroads made by Asian multinationals in the rest of the world since the year 2000, not only in the form of exports but also in terms of purchases and production in every continent.

The media has born witness to and provided a running commentary on this success story, providing reflection and making its own contribution to the growth process.

As the countries of Asia have undergone economic growth, Asian media organizations have assigned ever greater numbers of journalists to coverage of this field and have increased the size their economy sections significantly. The proliferation of dailies and journals specialized in business and economy, along with websites and/or television channels, is a further sign of a society and market that is growing.

The press has played a key role in strengthening the economy, because thanks to news published about successful business corporations, new production technology or other related information of interest, it has helped to inform and educate the population about finance, business opportunities. An increasingly large middle class needs more information of this type in order to take important decisions. Without economic journalists and business press there is no social well-being and growth.Asia is one of the most solid economic regions in world today, which means that Asia’s economic journalists now face new challenges and have new social functions to perform. The members of its growing middle class are avid readers of economy sections in generalist dailies, along with the increasing number of entrepreneurs heading small and mid-sized companies. They all demand more detailed information with an international slant, related not only to their own country, but also to the rest of the world (Europe, US, Latin America). Information is power, and it is a power that until now has been concentrated in the hands of a small number of international media.

In order to lend our support and bring added impetus to this important personal and social challenge facing economic journalists in Asia, IE BUSINESS SCHOOL has created the IE BUSINESS SCHOOL PRIZE FOR ECONOMIC JOURNALISM IN ASIA, aided by the sponsorship of CAF Banco de Desarrollo de América Latina in the form of 6000 euros (aprox 7500 US Dollars). The Prize recognizes the article and media that best fosters economic culture among the population of the country in question by explaining how global trends and movements are impacting the spending power of its citizens.

The competition is run in parallel with the IE BUSINESS SCHOOL Prize for Economic Journalism in Latin America, the most prestigious award of its kind in the region, which will see its third edition in 2013 with the participation of over 1,000 Latin American journalists working with leading media organizations.

The key objective of the Asian edition of the IE BUSINESS SCHOOL Prize for Economic Journalism is to gain social recognition for the work of journalists who follow world economic trends on a day-to-day basis, transforming them into information that serves to promote a more prosperous, competitive and global society.

More information and registration of your articles you can find here.

Global Engineering Leadership as a tool for successDo you want to be an Entrepreneur?