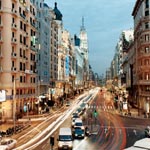 Madrid stands for quality of life. The capital is up two positions in the annual ranking of the 25 most liveable cities published by the British magazine Monocle, taking the tenth position. The Urban Quality of Life Index, featured each year in Monocle’s July edition, has become a world standard used to measure the urban parameters that define each of the cities that make it into this prestigious list.

Madrid has jumped up the scale for the third year in a row after taking the 13th and 12th positions in 2008 and 2009 respectively. Of the 25 cities included in the Index, only seven have improved their position in 2010 compared to the previous year, and only three of them stand among the top ten.

By making it into the top ten of the world’s most liveable cities, Madrid now shares a privileged status that only includes three other capitals with over three million inhabitants: Tokyo, Paris and Melbourne. Despite the general Spanish context, the capital is still an appealing place to live in and invest in.