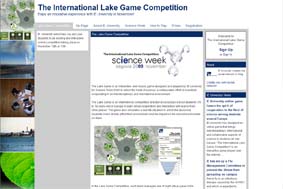 IE University has designed an online game that brings interdisciplinary, international and collaborative aspects of science to students all over Europe. “The International Lake Game Competition” is an interactive game played over the internet, whereby participants gain first-hand experience of the tension involved in deciding between cooperating for the good of their community, or opting for personal gain. The game was created by the multimedia department of IE Business School’s e-learning unit, and will soon be played by students from countries that include France, Switzerland, Portugal and Spain. Participants will compete online on November 12 to demonstrate their capacity to cooperate in an unusual setting: an artificial lake on whose shores 8 factories have been built, all of which need the water in the lakes to produce their goods.

The way the game works is apparently simple: participants are divided into 24 teams, which in turn are positioned around 3 artificial lakes in such a way that each team is in charge of one of the 8 factories around each reservoir. The factories have to decide, as the game unfolds, if they will make the effort to clean the waste water that flows out of their plant and into the reservoir, in which case their income will go down, or if they dump untreated water, in which case their profits will go up. The production process of all the companies will be halted if the level of pollution in the reservoir goes beyond a given threshold, which means that cooperation with the other factories is vital for their own survival and a chance to get through to the final. The company who makes the greatest profit will win the game.

The teams, half of which will be international, will have two opportunities to communicate using a webcam and microphone; hence, the competition will be run entirely in English. It is the most innovative and risk-based activity offered by IE University for the Science, Technology and Innovation Week, a key event in the communication of advances in science and technology in Europe, and set to take place from November 12 – 19 in Spain’s Castilla y León province.

The coordinator of activities at IE University, Jesús G. Ochoa de Alda, sees the game as an ideal opportunity to showcase the issue addressed by the latest winner of the Nobel Prize for Economy, US researcher Elinor Ostrom, who was awarded the Nobel Prize for her “analysis of economic governance, especially the commons”. Her theory overturned a line of thought that has stood for the last 30 years that claimed that the overexploitation of shared resources by a community would inevitably lead to their extinction. Ostrom rejected this theory, favoring an alternative ending, and which makes for an excellent setting for the Lake game, based on dialogue among the members of the community. Ochoa, who teaches Evolutive Biology at IE University, observes that “sometimes the individual has to earn less so that the community can survive”.

In addition to the Lake game, IE University has programmed a further 20 activities for the 2009 Science Week, including courses, workshops, conferences, roundtables, exhibitions, and fieldwork. The object of all said activities is to serve as a platform to bring science, technology and innovation closer to the society they serve.

How do you know a Law degree is for you?IE among Top 10 Business Schools worldwide in Aspen Institute’s Sustainability Survey