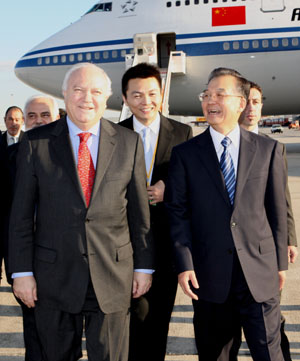 China will take active steps to seek a balanced growth in bilateral trade with Spain as part of its efforts in promoting all-around China-Spain cooperation, visiting Chinese Premier Wen Jiabao said Last Friday.
China and Spain have planned to increase bilateral trade volume to 40 billion U.S. dollars by 2011, Wen said at a meeting with his Spanish counterpart Jose Luis Rodriguez Zapatero.
To reach this objective, China will send a purchasing group to Spain so as to expand its product and equipment imports from the country, said Wen, who is on an official visit to Spain.
During the meeting, the two sides pledged joint efforts in enhancing comprehensive bilateral cooperation and exchanges.
They agreed to expand two-way investment, particularly in the areas of telecommunication, infrastructure construction, auto industry and logistics.
Spanish enterprises are welcomed to explore markets in China’s middle and western regions, while Spain looks forward to receiving more investment from China.
Cooperation between the two countries’ small- and medium-sized enterprises is also encouraged, Wen said.
The two sides also pledged to enhance cooperation in science and technology, and to carry out joint research and development in such fields as renewable energy, ecological environment and recyclable economy.
“At present, China and Spain should join hands in tackling the financial crisis, and the primary task for us is to boost economic growth,” said Wen.
After the meeting, Wen and Zapatero attended a signing ceremony for a number of documents on the two countries’ cooperation in finance, aviation, energy and telecommunication.
China and Spain also issued a joint statement on further strengthening their comprehensive strategic partnership.
Wen arrived in the Spanish capital of Madrid last Friday for an official visit, aimed at further bolstering bilateral ties and cultural exchanges.
Spain is the fourth leg of Wen’s week-long Europe tour, which began last Tuesday and has already taken him to Switzerland, Germany and the European Union headquarters in Brussels.

Digital Advertising, an anti-cyclical sector?The time has come for an arsenal