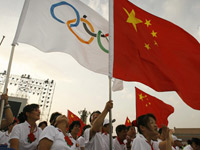 The 2008 edition of the Global China Business Meeting will be held in Barcelona on 17-19 November. The Global China Business Meeting is the foremost annual gathering of Chinese business leaders and their global counterparts. The event is open to Chief Executive Officers of the world’s leading companies. More then 400 participants are expected to take part in the meeting. As the current financial crisis intensifies, participants will examine the state of the global economy and China’s role in warding off a global recession. With the melting down of the global financial system participants will conceptualize the characteristics of the Chinese economic model and its merits to ensure long-term growth.
The 2008 Global China Business Meeting will provide a special focus on China’s interaction with other emerging economies, including Latin America, Africa, the Middle East and India. A review of the Beijing Olympics will be another theme. Senior executives from around the world will discuss Chinese firms’ growing impact on global business and will conceptualize the globalization of Chinese firms.
Outstanding speakers include José Luis Rodríguez Zapatero, Prime Minister, Spain; José Montilla Aguilera, President, Generalitat de Catalunya, Spain; Supachai Panitchpakdi, Secretary-General, UNCTAD, Switzerland; Xu Kuangdi, Vice Chairman, 10th CPPCC National Committee and Yu Guangzhou, Vice Minister of Commerce, China.
The Global China Business Meeting is geared toward knowledge creation and business cooperation, with meetings between company leaders, government officials and regulators, aimed at finding a common ground to expanding our operations outside China