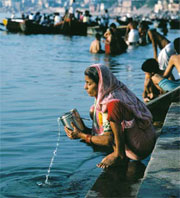 Accordingly, India is characterised as a country that exports software and financial services experts, as well as computer engineers. The growth in value added in 2006 was as high in services as it was in industry and reached 11%. This growth has been possible thanks to the increase in domestic savings, which has come with an acceleration of the internal investment rate, which increased by almost 11 percentage points of the GDP between 2001 and 2006. The rapid improvement in saving levels and the acceleration in the formation of national capitals in recent years constitute more proof of the positive impetus for growth that has come from the structural reforms process.

Demographic dividend
The population or forecasts of the UNO estimate that, in the year 2025, the Indian population will total 1,395 million (today, the figure stands at higher than 1,100 million). The determining factor behind the growth of the GDP over the coming decades will be the increase in the working-age population. In 2015, the population 15-64 years-old is expected to increase by almost 20%. In addition, it is estimated that this trend will continue and the working-age population will have increased in 2025 by more than 36% in comparison with the 2005 level. Should these forecasts be correct, in 2025, more than 67% of the Indian population will be between 15 and 64 years-of-age.

the growth of the GDP over the coming decades will be the increase in the working-age population. In 2015, the population 15-64 years-old is expected to increase by almost 20%. In addition, it is estimated that this trend will continue and the working-age population will have increased in 2025 by more than 36% in comparison with the 2005 level. Should these forecasts be correct, in 2025, more than 67% of the Indian population will be between 15 and 64 years-of-age.

Challenges
The Indian economy will be put under pressure in 2008 as a consequence of the world economic crisis. Its growth rate of 9% of recent years will suffer from the negative impact of American deceleration. Indeed, the Asian Development Bank has anticipated that the growth of the GDP for the 2007 tax year (which ended in March 2008) will be 8.7%, almost one percentage point down on the figure for the previous year. The country is also facing other challenges, such as pressure from inflation, which may lead the Indian monetary authorities to increase interest rates. This would increase capital cost and have a negative effect on trade and credit for business all over the country. In short, India remains vulnerable to economic cycles. Consequently, some analysts suggest that the GDP may grow by only 7% in 2009. And that would be a problem, since the Indian economy must grow at 9% or 10% for a few years to reduce its poverty levels.

The boost provided by the reforms that were implemented in 1991 is probably coming to an end and it will be necessary to implement a new economic policy that adds flexibility to the labour market and improves the countryâ??s struggling infraestructures. The potential is there; it simply has to be exploited with the appropriate economic policies. (Table 2 includes the forecasts for growth for the main emerging economies for the period 2007-2050.) After Vietnam, India is the world economy that will enjoy the highest growth, with a forecasted yearly average growth rate of 8.5%.

Conclusions
Next 15 August, India will celebrate 61 years of independence. The former British colony has the largest population in the world after China, and it is the largest multi-party parliamentary democracy on the planet. It has a potential that could turn it into one of the driving forces behind the world economy in the 21st century. This is due to the fact that it has the most powerful middle class in the world; it leads the way in the training of computer technicians and engineers; English is spoken everywhere; it specialises in cutting-edge technology sectors; and has experience in fields such as nuclear energy, combat helicopters and aeroplanes, satellites, software and oceanography.

However, a significant part of the population lives in misery. As a result, India has a long way to go in areas such as reducing poverty and the migration of workers from the country to industry or services. Unlike China, the Indian population of around 1,100 million inhabitants is very young. Even so, India only can take advantage of this demographic advantage if it creates sufficient jobs for those who constantly join the workforce; otherwise, the high levels of unemployment could exacerbate social tension.

Despite the importance of its technological sector, as an economy, India is still far from reaching the importance of China, presently the worldâ??s factory. However, India is becoming the worldâ??s great services provider. This is due to the high level of education of part of its population, as well as to the fact that salary costs are very low, which means it can offer very competitive goods and services on international markets. For this reason, India attracts many American and European companies from the services sector, especially software, which subcontract many services to Indian enterprises.

Accordingly, PriceWasterhouseCoopers (see The World in 2050: Beyond the BRICs) forecasts that by 2050 India will be the third-ranked world power, preceded only by China and the U.S. As Table 3 shows, in 2050, India will have become the third-ranked economy in the world, with a size equivalent to 88% of the American economy. Indeed, India is now the fourth-ranked economy in the world, with a GDP of USD 4,217 thousand million in terms of purchasing power parity, according to the World Bank (see World Development Report, 2008). India is preceded only by the U.S., with 13,233, China with 10,153 and Japan with 4,229, and followed by Germany, with 2,623 (see Table 2).

The 21st century will be an Asian century. Thanks to its vast size and formidable exporting power, China is already becoming the economy of Asia and the world. However, China will not stand alone in the world economic order. India has the potential for being there too: India is the China of the future.

Source:
The World in 2050: Beyond the BRICs. PriceWaterhouseCoopers (2008)

Source:
The World in 2050: Beyond the BRICs. PriceWaterhouseCoopers