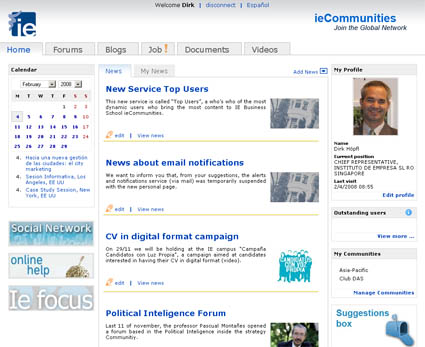 IEâ??s social network promotes relations between the business school’s students and alumni classified according to the industrial sector in which they work, their area of interest or the world region where they operate. The network provides a platform where IE students and alumni in more than 100 countries, IE professors and external executives can build on their contacts, share expertise on management and do business all over the world. Randstad and SAGE Large Enterprise Division sponsor the project debate forums on Executive Development and Information Technologies, respectively.

According to Juan Ignacio MartÃ­nez, Director of Development, “Since 2006, the ieCommunities platform has kept growing and now has 8,000 international executive users who wrote 12,000 posts on business management last year. Even more importantly the authors all hold key positions in the business community which makes for quality debates”. MartÃ­nez also underlines the fact that, “IE is building and consolidating the network thanks to backing from companies such as Randstad and SAGE Large Enterprise Divisionâ?. Acting on a recommendation by their advertising agency, Iceberg Media, the companies have sponsored the forum and blog on Professional Development and the forum on Information Technologies, respectively, with a view to providing the network with added value.

There are specific communities for different areas of management, including management control, corporate responsibility, diversity management, economic environment, finance, human resources, marketing, legal issues, operations, strategic management and technology. In terms of industrial sectors, digital convergence, tourism and real estate have their own platforms for discussing specific issues that affect their activities. Moreover, members of the ieCommunities can take part in discussions related specifically to Africa/Middle East, Asia-Pacific, Central Europe-Eastern Europe, Europe, Latin America and North America, in order to build relations with executives working in the same environment and learn about doing business in each region. Spain has the highest number of users, followed by the USA, Germany, France, Sweden, Italy and Mexico.

On July 1 IE Business School organized the ieCommunities Day, aimed at gauging the potential of virtual communities. The event focused on â??Creating Virtual Communitiesâ?, and in addition to 150 participants onsite it was transmitted via internet as speakers talked about the problems they had faced when setting up their social networks. The Day was brought to a close with a debate in which students, alumni, faculty and IE personnel examined the challenges involved in using virtual communities as communication and networking channels.