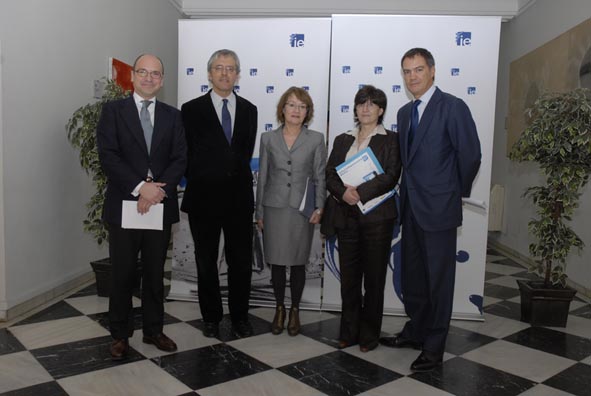 One of the main conclusions of the report is that there was moderate growth of entrepreneurial activity in Spain 2007. The TEA (Total Entrepreneurial Activity), an index used to measure the number of business start-ups, stands at 7.6% for 2007 in comparison with 7.3% for the previous year. This rate of growth places Spain in 4th position among EU countries and 8th among the OCDE countries analyzed by the GEM Report. Moreover, the â??death rateâ? of business start-ups in Spain has dropped by 16.6%, pointing to higher rates of consolidation. In the words of Ignacio de la Vega, Director of the GEM Report in Spain and Professor at IE Business School, â??2007 was a good year for entrepreneurial activity as a whole. In addition to an increase with regard to 2006, which saw spectacular rates of growth, business start-ups are growing in quality and dimension, and are based on increasingly solid business models which translate directly into a marked drop in business death ratesâ?.Immigrant Entrepreneurs
The growth of Spainâ??s immigrant population is playing an increasingly important role in the countryâ??s entrepreneurial prowess. The number of foreign entrepreneurs continues to rise steadily and has grown by 9.4% in comparison to 2006. 12.8% of all business start-ups in 2007 corresponded to business projects implemented by foreigners, which is double the 5.7% figure for 2005 and 11.7% higher than 2006. The GEM Report states that the immigrant population in Spain is proportionally more entrepreneurial than the Spanish population, and within the immigrant community, those immigrants from outside the EU are more entrepreneurial than those from EU member countries. Foreign entrepreneurs are younger than their Spanish counterparts, particularly those from outside the EU, given that the average age of EU immigrants is higher than that of the Spanish population.

Ecuador was the country of origin of the greatest number of non-EU immigrants in 2007, replacing Argentina which held first position in 2005 and 2006. The number of immigrants from Ecuador, Colombia, Venezuela and Romania have climbed several positions during 2006 and 2007.
France is the country of origin of the largest number of EU immigrant entrepreneurs in Spain during the period under analysis. Moreover the diversity of origins grows greater each year.

Profile of an entrepreneur
The profile of the average Spanish entrepreneur is relatively stable. It comprises a man of 37.9 years of age, who has undergone higher education, has a good income level, and works full-time on his business project.

The greater part of business start-ups were micro-firms and, as in previous years, most commonly took the form of self-employment. Growth forecasts are more tentative than in the previous edition of the report, which reflects a certian level of caution among entrepreneurs given the uncertain situation and slight deceleration of western eocnomies.

The figures provided by the report confirm womenâ??s less favourable position in terms of integration into social networks that could bring support when it comes to creating and developing a successful business.

Loans from a financial institution continued to be the most popular source of capital for entrepreneurs in Spain. 28.2% stated that they had received or expected to receive funds from a finance institution, a very similar percentage to the previous year (28.4%). Informal investment by family and friends dropped from 29.8% to 21.2%. Governmental aid still plays an important role in funding buisness projects, although it had dropped from the previous year. Finally, the GEM Report highlights the slow progress of private funding through professional business angels or venture capital, which still play a meager role in funding start-ups in comparison with other sources of funding.

The percentage of firms that use innovative technologies went up from 18% in 2006 to 27% in 2007. The greater part of business start-ups continue to be micro-firms, but in 2007 there was a larger number than usual of start-ups with employees. There was also a marked improvement in market share gained, given that 8% had plans for expansion in their sector, up from 0% in the previous year.

There was also a steep increase in entrepreneurial activity in existing firms. The percentage of firms that generated new projects was 6% in 2007, whereas in the previous year only 1.2% of consolidated companies launched new projects.

What the experts say
The authors of the GEM Report, headed by Alicia Coduras of IE Business School, used a sample of 27,880 people of between 18 and 64 years of age. A total of 564 experts from 9 spheres related to the world of entrepreneurship (including finance, politics, education, R&D), were interviewed. Questions covered opportunities for entrepreneurship, skills needed to start up a company, and which were the main issues that furthered or hindered the entrepreneurial phenomenon. Experts felt that the main obstacles for entrepreneurship in 2007 were centred around financial support, social and cultural norms, government policies and a failure of the educational system to promote the spirit of entrepreneurship. The Spanish economic climate also underwent considerable change, dropping from the No. 10 position to No. 7, which shows that in July 2007 there was growing concern about the macro-environment.

With regard to recommendation, the general issues that emerged in expertsâ?? comments were related to education and helping to foster the entrepreneurial spirit, a theme that has featured constantly in the report since the GEM EspaÃ±a Observatory was created, and which is improving but at a very slow rate. Government policies are highly diverse, but there are also common concerns: financial support, continuity and expansion of governmental programs, and measures to help shape the mind-set of society with regard to the key role of entrepreneurs in the economy.