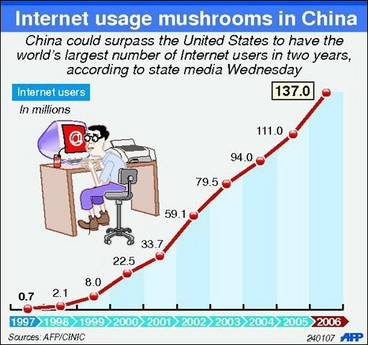 This article “Alternative Reality” published in Jan. 31st, 2008 in Economist has indeed many insights about current China’s reality of online population.
Here are some of Chinese perspecives about the article’s comments on “Chinese way”.
1) “For them and for many users in China, the internet is not truly a worldwide web: it is only as wide as China. But China’s internet community is evidently a world unto itself. “
Well, I think the language is a big problem for most average Chinese to explore the world. Even though we start compulsory English courses in middle school (now starting from primary school, some rich kids even earlier), many of us only “use” English in exams, which restricting us the access to the international world.
Besides, many of us don’t have as much freedom to go outside China due to political/economical limitations, nor as much exposure to foreigners as westerners do. Also, the country is so big and very different from region to region, somehow, it seems no need to have more “diversity”.
But for the generation born after 1975, we are more influenced by Western culture, or say, the American culture, and eager to explore non China world. I can say 90% percent of Chinese of this generation who have university degree (or above), who work for multinationals, who grew up watching foreign cartoons… feel more emotionally connected to the western popular culture. I personally think it is because that after 10 years of Cultural Revolution ending in 1977, we lost many Chinese traditions, so the foreign culture brought by the “Reform and Opening up” starting in 1978 easily occupied our childhood life.
2) Although there are tight constraints on the provision of hard news, internet sites such as Sina and Sohu provide a steady supply of gossip, features, dabs of propaganda and slightly salacious stories and photos, and are constantly testing the boundaries of what is permissible.
Well, it has been like this throughout the Chinese history, that is, the ruling class wants to control the mass by controlling/guiding the mainstream thoughts, while the mass will ALWAYS “rebel” in private.
3) Because of the single-child policy, have no siblings and are searching for virtual friendships.
This is true. Actually many Chinese go on line only to play online multiplayer games and chat on different messengers like Tencent and MSN.
As for me, I’m also amazed at the some of self created entertainment videos on Chinese popular video site such as Youku, Tudou, 5Show.
Different from our public behaviors which are perceived as more reserved than westerners, those videos are very expressive, some crazy and even doing “stupid” things. My personal explanation is that we’ve been repressed so long time, so we use internet as a release channel. And thanks to the government that they care more about “inappropriate political thoughts” than the mass pop culture.
Just Show you examples of these two extreme popular fun groups in China.
1) Group “Back Dormitory Boys” (后舍男生), they try to reinterpret all popular songs in their own funny way without actually singing.

2) Group “Crazy Peasant Worker” (民工也疯狂), this is one of their funny series based on the popular Chinese movie “Curse of the golden flower”.